One Of Us, A Tower District Mystery--Released August 1, 2021

Roxi Carlucci is starting her life over again in her mid thirties having lost her book contract as a children’s author and her roommate. She leaves behind her pet rat and hamster rescue, her community podcast, and her beloved ocean town of Ayr, and finds herself moving to the Central Valley of California—not really where she wants to be. She moves to Fresno to live with her cousin, PI Stephen Carlucci, in the midst of a blisteringly hot summer. She is thankful for one thing, at least he lives in the heart of the arts district in Fresno—the Tower District. 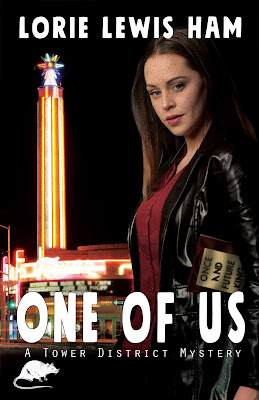 Looking for something to do with her time while she figures her life out, Stephen talks Roxi into helping with a local theatre production which is also a fundraiser show for an  animal rescue. Things quickly take a dark turn when the stage manager is found murdered and Stephen is hired to find the killer. With a degree in criminology and journalism, Roxi is perfectly suited to help, and in a perfect position to snoop when she is asked to take over as stage manager. Who could possibly have wanted the mousy stage manager dead when she was practically invisible to everyone? Might they find some answers on the local gossip website?

While investigating, Roxi explores her charming new home and gets to know its eclectic group of actors, artists, writers, and business owners. She is especially interested in the moody young playright who wrote the show they are performing, and who also happens to work at the local bookstore.

Not the mild mannered person you might expect a former children’s book author to be, Roxi is tough, comes from a Mafia family, knows how to use a sword, and has plenty of secrets of her own. Her furry companions include a dumbo rat named Merlin. Her passions in life include animal rescue, Sherlock Holmes, Star Trek, King Arthur, and fighting for the underdog.

Pets from "One of Us"

Lorie Ham is a participant in the Amazon Services LLC Associates Program, an affiliate advertising program designed to provide a means for sites to earn advertising fees by advertising and linking to amazon.com.